Uncle Hong has an instinct when something ‘isn’t right’. Just ask Probe’s staff who have been known to roll their eyes when they see him walking towards them with purpose, papers in hand.  Despite the rolling of eyes, the staff has to admit one thing:  in the 47 years that he’s been at Probe, of which a large chunk has been working in the credit department, uncle Hong is most often right.

Of course, uncle Hong wasn’t always uncle and he wasn’t always right.   In fact, Hong could be wrong.  To be fair not really wrong, but a little bit of an adventurous boy.  Just ask anyone who knew him in his Mooi Street days, when he had long hair, drove a ’67 Valiant and wore platforms and bell bottoms with a pack of Texan plain in his back pocket.

Chatting to uncle Hong as he recalls the days of his youth is highly entertaining.  In his 20s, Hong Jan worked at Barney’s Super Service Station that later changed to Imperial Motors which in those days consisted of a single car dealership on Mooi Street in downtown Johannesburg.  Hong Jan says, “After work each day a group of us guys would go off to the Chelsea Hotel or the Ambassador.  We would sit around and smoke, listening to a guy singing and playing his guitar with the sounds of the city’s night life pumping all around us.  We’d drive home at about 1 or 2 in the morning; in those days I lived in Yeoville.  We’d have a quick nap, then take a shower and be ready for work the next day.”

The name Jan was most probably spelt originally as Quan.  As Chinese immigrants to South Africa in the late 1930s, Hong Jan’s parents were faced with immigration authorities who simply could not understand them.   To authorities the name sounded like Hong and so the couple were officially entered into immigration records as Hong.

“My parents are Chinese, but I was born and bred in South Africa,” says Hong Jan, “and I’ve been married to my lovely wife, who happens to be Jewish, for 46 years.”  Married is a loose term here.  Hong Jan and his wife are actually common-law husband and wife, having never officially married.  The reason for this is that back in the days before democracy in South Africa, people of Chinese ethnicity were classified as ‘non-white’.  As Hong Jan’s wife was classified as ‘white’ it was illegal for them to be married. But love finds a way, and the two have been together ever since. Hong Jan is a proud father and grandfather of two children; a son who lives in South Africa with his own children; two daughters aged 12 and 10, and a daughter who resides in the United States with two sons of 12 and 10, and a daughter who turns 17 this year.  “I myself am an orphan,” adds Hong Jan with his customary wit.

Following his stint at Imperial, Hong Jan joined Probe under Frank and Rick’s father, Frank senior.  “When I joined,” recalls Hong Jan, “Rick wasn’t even born.  And Frank junior was just a small boy.  He would sometimes visit the office with his dad.”

Little was Hong Jan to know that Probe would become an extended family for him and that he would spend the bulk of his life working at the family-owned company, sharing in both the good times and the challenging times that come with building up a business.

The good times were plenty, and Hong Jan learned a great deal as the company began to grow.  He was involved in the purchasing department and later in the credit department where he had to take ownership of important documentation & sales. He became known as “Mr Delco” and through his experience with the product, had all the part numbers in his head. “I’ve been everywhere in Probe and have gained a lot of experience over the years.   These days I like to help the younger staff members, often with tasked not even related to credits.”

Although few and far between, there have been times of difficulty.  Hong Jan recalls that during the economic recession of the 1980s, Probe staff’s working hours were reduced to 3 or 4 days per week, through absolute necessity.  “Many people resigned, but a core group of us stayed on and committed to work with Frank (Snr) to keep the company going.  Thankfully, this incredibly tough situation only lasted for a few months, but at the time we had no idea how long it might last for.”

In 2009, Hong Jan retired.  Three months later he was back at Probe.  “I was asked to come back out of retirement, but you didn’t need to twist my arm.  With my wife at work herself, I was bored.  I wanted to feel energised again.”

Hong Jan is still at Probe today.  When asked about the difference between the early days and the Probe of today he says, “In those days it was a small company.  I’ve watched Probe grow and expand into a business that has remained relevant in the market and strongly committed to providing great service to our customers.  Although there have been changes over time, I’ve always felt at home and have a sense of belonging here.  After all, Probe is my family.” 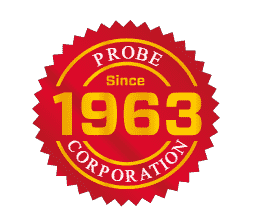